Buttonholes and memories were the order of the day at Bromley Methodist Church on Sunday 4th October as nearly 200 people – members past and present aged from just a few weeks old right up to their 90s - attended a special Communion service to celebrate the 25th anniversary of the official opening of the building in College Road.

The congregation of Bromley Methodist Church (BMC) began worshipping in their new church in College Road during the summer of 1990, before the building was officially opened and dedicated in the October.

To celebrate the 25th anniversary on 4th October, BMC resurrected an old tradition which saw most of the congregation wearing a buttonhole in celebration.

The day focused on collective worship and thanksgiving for the past 25 years, and included a celebratory lunch for nearly 140 people. Tea and a celebration cake rounded off the day.

Invited guests included past ministers, preachers and deacons. The Reverend Kathleen Allen, who was married to the Rev Tom Allen, the minister at the time of the opening, shared the day’s proceedings with current minister, the Reverend Karen George.

Other guests included twins Sarah and Hannah Tinson, who as toddlers, and then the youngest members of the congregation, laid the foundation stone for the new church on 3 June 1989.

During the Communion service an anniversary banner bearing the words Faith, Hope and Charity – designed by Mavis Bacon and made by Margaret Stuppel – was blessed. The banner reflects the stained glass window that was first part of the Victorian Methodist Church that stood on the High Street and which is now incorporated into the existing building. 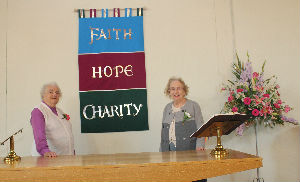 During her sermon, Rev Allen reminded the congregation that the church was more than just the building and that Christians were called to be living stones who build their lives and relationships on God. To help the congregation remember this, each person was given a small stone to take away with them.

Also taking part in Sunday’s celebration was Jenny Carr – whose baby daughter Harriet was the first to be christened on the College Road site by Rev Tom Allen on the day it first opened. She recalled how it had been an “incredibly special day”, and how Rev Allen had led a procession of church members and friends around the outside of the church and along the pavement of College Road.

Twenty-five years later, Rev Karen George again led the congregation in an Act of Rededication as they walked around the outside of the building, singing the same hymn as in 1990 – “We are marching in the Light of God”, followed by prayers also based on those in the original opening service.

Former minister the Reverend John Bown, who retired in 2006 after 11 years at BMC, said Sunday’s celebration showed that the church was “very much alive”.

“That’s shown by the numbers of young families and children at the church today,” he said, adding that there was more to the life of a church than just bricks and mortar.

Current minister, the Reverend Karen George, said it had been a “fantastic day involving everyone from the youngest to the oldest in the celebrations”.

“It was amazing to see the range of talents and skills within the congregation as they worked together to celebrate the 25th anniversary in style,” she added. 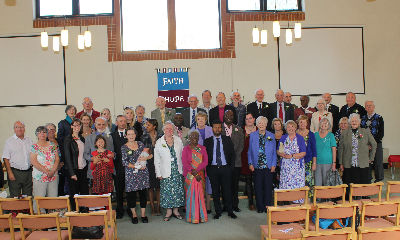 The church stewards past and present with their families

On Saturday 12th September our circuit representatives joined others from the London District of the Methodist Church Synod as they joined the march through London in support of refugees. 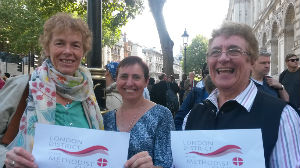